I can’t believe we had to endure 20 episodes of this season of the Real Housewives Of New York City and then have to suffer through a 3 part (which means 3 weeks) reunion. I’m toast. Therefore since what I really care about is the fashion, I may just recap this one episode only since the women will presumably be wearing the same outfits all of the reunion. Besides, I don’t think I can take any more of the LuMann/Tom Cat debacle. It makes me very sad for women. She should not be THAT desperate to get married. I would rather be alone than be with man who would make out with another woman at a bar for over an hour a week after our engagement. Besides, at his age, it’s just icky.

Just a warning…I am going to be focusing more on the fashions sitting on the sofas next to Andy since that’s what I care about. Well that and finding out if Luann is really still going to marry that jackass Tom Cat. 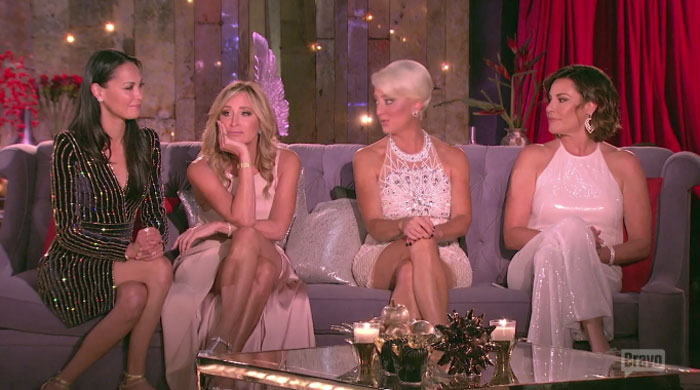 Let’s start from left to right. However I want to note that their makeup is flawless. From the neck up most of the women look fantastic.

Jules – She is normally one of my weekly best-dressed, but I did not get this outfit at all. Her black with sequin pinstriped minidress with huge shoulder pads was very 80’s. It was not only aging, but for the wrong season. Had this been taped in February and not the summer it might have made sense. She should have worn something lighter. What a huge disappointment.

Sonja – She brought it for this reunion! She can really clean up. She claims she has dirt on all the housewives and after this season is having resentment so she’s a raring to go. But let’s focus on her flawless hair and makeup and her blush pink dress looked fantastic against her perfectly tanned skin. Her silver YSL tribute platform pumps were on point. She was a winner.

Dorinda – Her hair looks better shorter but that’s where my compliments end. I knew she would wear white and sparkle and boy did she! As usual her choice was too short and cheap looking. The “art deco” dress did nothing for her figure (it made her butt look huge sitting on the sofa) and the crystal detailing with the sheer white fabric was too busy and distracting. I wish she would dress her age, or at least closer to it. One of my least favorites.

Luann – Her blush jumpsuit was more of a halter style and had subtle sequins. She wore minimal jewelry less her ginormous engagement ring. She looked pretty good. For LuMann. I was surprised she wasn’t wearing one of her signature statement necklaces. Bethenny – I loved her v-neck white with a hint blush pink gown and layered necklaces. She was the chicest by far and very on-trend. Her bobbed hair had a little bit of curl to it in an effort to make it look different from Luann’s I suppose – but Luann has side-swept bangs. However, I would say Bethenny looked the most tired of the bunch.

Ramona – Hair and makeup? Flawless. That’s where it ends. Again she picks a too young cut and boring black dress. Hey at least it wasn’t her signature macrame. The dress was obviously meant to again show off her ample fake boobs, but the touch of sheer black ruffle edging made this dress tacky and too young. Had that element not been there I might have liked it better. I also never care for her jewelry choices.

Carole – OMG, what was she thinking? First let’s start with the fact she has had fillers in her face since the show ended. Her face shape was totally different and tighter. I almost did not recognize her. Then she wore a confusing high neck ruffled blush gown that looked like a Little House on the Prairie/Sisterwife dress. Add a broach, chain necklaces, pearl drop earrings and braided hair and I was totally dumbfounded. I expected Carole in something chic and maybe too revealing, certainly not this covered up. She never dresses her age, but usually it’s too young. This was too old and too ugly. Just a big, fat fail. And the worst part? We have to see it for three weeks! Now for a little of the revelations/dirt from Part 1 of 3.

Andy commented that it might be Luann’s last season as a countess to which she replied, “Yes, but you know, once a countess, always a countess.” Oh no. Is she for real? And Carole responds “I don’t think that’s true.” Eye roll from Luann.

In a nutshell, Andy congratulates Luann on her engagement ring, Luann tries to make it a point to show that Bethenny has been trying to get divorced for 4 years when she was married for 2. Bethenny is dating someone but wants to keep that part of her life private this time. Michael filed for divorce from Jules. Dorinda is still seeing sweaty John a couple times a week and on the weekends in the summer.

Starting with recapping Dorinda, John cleans up her messes, but he helps make them too. He is sloppy sappy with Dorinda which is just disgusting. Dorinda tries to sell John to everyone. What is it about John that rubs people the wrong way? Everything! He comes on a little too strong, is handsy and “does not swim well in many circles” said Sonja. Is it me or does it seem like maybe Dorinda feels this guy is the punishment she deserves for some unknown reason? Apparently he is nothing like her deceased husband and it’s sad she doesn’t think she can do better. She had to leave a lot of events alone. Apparently after watching the show John admited he comes off as an asshole according to Dorinda. Bethenny suggests John does coke which upsets Luann, “You are always into it.” I get the feeling Luann is going to go after Bethenny the entire reunion and she may go down in flames for it. Sonja says, “Everyone knows you do drugs,” referring to Dorinda. Sorry, but if you saw that bra party episode and have EVER seen anyone on coke, John was coked up. Subject then dropped.

Now it’s time for Ramona’s recap which is a snoozefest. They show her new single and ready to mingle groove with new titties and new clothes. It’s hunting season! She has no game, but flirts with everyone and is out every night. We were also surprised to learn she has been on speaking terms with Mario. We also discover she can not say the word reggae nor can she dance to it (or anything). We also learn Ramona has been hanging out with a ton of gays because she likes to flirt. Say what?

Then the recap turns to Dorinda’s party at the “Berzerkshires” which was a total disaster. Especially between Bethenny and Luann. Remember when Bethenny called her “a slut, a liar and a snake?” Dorinda wanted to light her house on fire and Andy asked if he thought it was cursed. She claims to have had it saged a half dozen times. I also learned Dorinda’s meltdowns have their own hashtag #Dornados. I had no idea.

The topic then turns to the comments Andy received that Bethenny slut-shamed Luann. Luann particularly did not appreciate the accusation that she sleeps with married men. However, there was footage of her doing so on the Turks and Caicos trip. Yet her excuse was that this man was unhappily married, but the real issue to her is that the snake in the room is Bethenny and that SHE is the hypocrite. “Because I’m dating a married man,” finishes Bethenny. You just know Luann has been DYING to share this tidbit of intel all night. Luann says everyone knows Bethenny was going out with him while he was still married and living at home.

Luann now feels confident that she has Bethenny backed into a corner and says, “Look now who is calling the kettle black?” Jules comes to Bethenny’s defense and says she remembers Bethenny saying she called his wife back in November just to make a time stamp. While Bethenny tried to explain what actually happened, Luann is talking to her side of the couch under her breath that Bethenny sleeps with married men and everyone knows it. “Do you have any other smoking guns you’d like to pull out because you are in quicksand, nothing’s sticking,” Bethenny says to Luann.

“Luann you have never been out with man you have not had sex with,” says Bethenny. When Andy calls Bethenny out on slut shaming Bethenny retorts, “If it is, call me guilty. I don’t know the exact definition of slut shaming but if it is calling out the fact that Luann has written books on etiquette and behaves like a complete whore while she’s out…I am guilty. I think it’s disgusting the way she acts.”

Luann feels vindicated she has shared that Bethenny is dating a married man so Bethenny says, “Let’s do it! and starts dialing her phone. She calls her boyfriend’s daughter on air. “You are a liar Lie-Ann. Just stay in the kitchen because it’s getting hot!” The daughter of Bethenny’s boyfriend says, “I can speak for all my siblings – my dad actually had back surgery about a year ago. So unless he was sneaking you through the back door which wasn’t happening there was nothing happening. You were not really a person in anyone’s life. You were just a good friend.” The end. The daughter would have sided with her mother had anything improper gone down. Carole says,”There’s reality and there’s Luann’s reality.” Point, match, set Bethenny.

Until next week…if I can take it (bit don’t count on it).

So far in order of fashion sense from the reunion:

Until the reunion part 1 of 3…raise your class of Pinot Grigio, Skinny Girl, Tipsy Girl, Modern Alkeme, Fandango shot or dirty martini! “These, these are my friends.”