You might have heard news anchor Sandra Smith recently started co-hosting a new show on FOX called America Reports with former White House correspondent John Roberts. We met and interviewed her almost 10 years ago when we were still Second City Style but I was living in NYC. Because of who we are and what we care about, we wanted to know all about her reporter on-air style.

This is a repost of my previous interview with Sandra Smith published on February 24, 2012 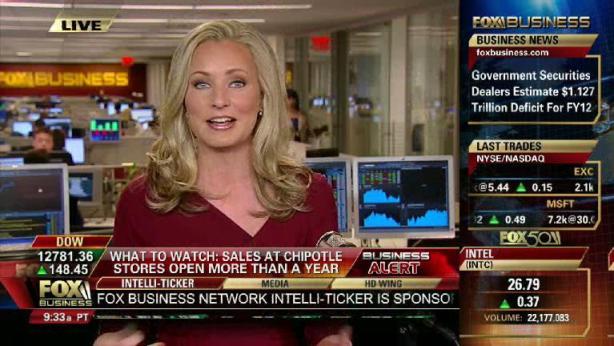 A few weeks ago I had the opportunity to meet and interview FOX Business Network’s rising star and Chicago native Sandra Smith. Sandra primarily works out of New York City, but owns a home with her husband in Chicago and reports from the Chicago Mercantile Exchange (CME) as well. Now I do care about the news, but I care more about her clothing.

When it comes to her working wardrobe Sandra thankfully embraces color. She’s lucky, she can wear basically anything and look beautiful. Us regular folk are not always as lucky, but I thought there might be something to learn from her. I left the hour I spent with her wanting to wear purple, pink and electric blue! That is quite a change from my basically New York influenced black wardrobe.

What you might not know is that Sandra (and the rest of the women on FOX) have a strict wardrobe budget, so they must chose wisely. Therefore, Sandra is the perfect role model for professional women facing the struggle of tightening purse strings and still climbing the corporate ladder in style. I thought she would have some great tips since she has to dress professionally for her on-air camera work reporting live from the CME and in the studios, while sticking to a budget. She is given a specific amount twice a year (spring/summer and fall/winter) and works with an in-house stylist, Gwen (who I got to meet) to chose her best looks that work for both her Chicago and New York reporting.

Sandra was born and raised in Wheaton, a suburb of the Windy City, and spent her childhood following her father around the floor of the CME where he worked as a commodities trader. Sandra Smith joined FOX Business Network as a reporter in October 2007 where she divides her time between New York and Chicago. Prior to joining FBN, Smith was an on-air reporter for Bloomberg Television. In this role, she covered U.S. equities and derivatives markets and contributed to breaking news and analysis.

Before Bloomberg, Sandra was the Director of Institutional Sales and Trading at Terra Nova Institutional, where she handled investment management and hedge fund accounts. She also assisted in the development of program trading models for existing and prospective clients. Prior to this, she was a trader at Hermitage Capital, where she executed U.S. equities and options orders, conducted portfolio analysis, prepared commission reports and serviced clients.

A graduate of Louisiana State University, Sandra is clearly very intelligent and when I met her, incredibly down-to-earth. I felt like I was talking to one of my girlfriends. Then again, don’t we all when talking about clothes and fashion? As luck would have it, the day I went to FOX to meet Sandra, the stylist was there for their bi-annual trunk show. So I was not only able to meet Sandra, but the stylist who helps her pull looks together.

“What I love about Gwen,” Sandra said, “is that she does not push anything on you, but gets you to try on clothes you wouldn’t normally pick…and they work!” I agree. That’s the key. Sometimes going outside your comfort zone is the best way to find things that look unexpectedly amazing on you.

On air in New York, Sandra mostly sticks to dresses. She showed me the dresses that reside on racks in her office and they consisted of well-known brands like Tahari, Anne Klein, Rebecca Taylor, Diane von Furstenberg, Calvin Klein, Ralph Lauren, Trina Turk, Max Mara, Donna Morgan, and a few commissioned by Gwen I have never heard of like Dana Maxx. Some were even the same dress in multiple colors. The later at night she is on-air Sandra can dress a little more risque/sexy.

In Chicago Sandra tends to wear more suit separates because she has to strap a mic and equipment to a belt when she is on the CME floor and that’s hard to do in a dress. She also smartly picks some items she can wear nine seasons (a trick my mother taught me) and organizes her wardrobe by color and season. The dresses tend to have geometric clean lines, without being loud as they translate well on high-definition TV. You want the details above the waist as that’s where the camera is most and  loud jewelry doesn’t work. Most of her dresses wholesale for between $120-$200, but Sandra does splurge on a few standout designer items that wholesale around $400 or so, the kind you would find at Bergdorf’s or Neiman Marcus.

Here is a look at Sandra’s on-air wardrobe:

When Sandra is completely finished with a couple of items she rotates them out. Since she technically owns the clothes she either gives her cast-offs to friends or to “Dress for Success.” I asked her how often she can wear something. She told me “I try to go down the line and wear everything at least once a season.” Shoes are her own responsibility and can not be open-toed.

I asked Sandra where she shops when she is looking for clothes for her off-air life.  “Alice + Olivia and in Chicago a store I love is Handle With Care in Old Town, but I don’t randomly shop. I love wearing skinny jeans.” She went on to share, “Here is my little secret: traveling constantly between New York & Chicago I couldn’t figure out how to organize and know what to wear. Every time I was in Chicago and would look for something I was like, darn, I left that in New York. So now, if you open my closet here in New York, everything is black and white. From shoes, to clothes to handbags, everything is is black and white. Then in my personal Chicago closet, it’s all colors.” Brilliant!

Then we were off to the trunk show!

Gwen said, “Can I tell you one thing about Sandra? She’s the perfect model. When I get something in that’s a little different I think, Sandra can wear it. She can wear anything!” Gwen attends all of the New York Fashion Week shows and then immediately visits showrooms to look for the appropriate styles for the women of FOX. She can’t use anything that is shiny, is too short, cut too low or has pattern. She also tries to keep black to a minimum. The samples are then sent to FOX for a week with swatches of available colors. Reporters book appointments with Gwen and they are off to the races.

Did you ever wonder how a anchor’s wardrobe is styled?

You may also like to read How To Look Your Best For Zoom Meetings And Video Chats A Look At The Stars In Stylish Winter Coats.

5 thoughts on “Inside Her Work Wardrobe: FOX’s Sandra Smith Dishes”