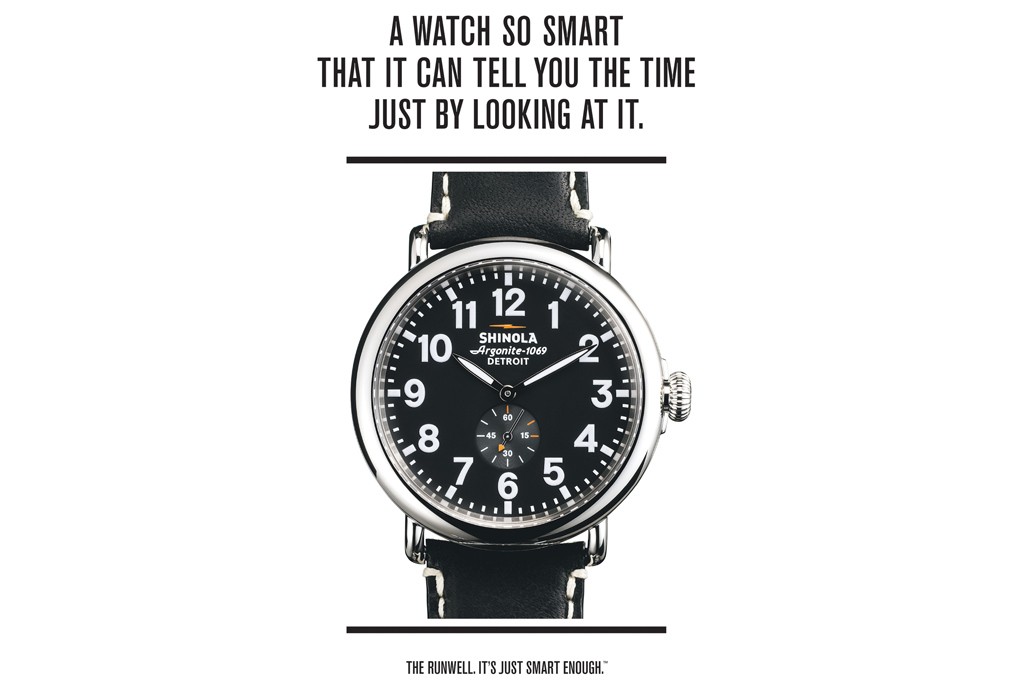 Shinola Takes Jabs At Apple Watch In New Ads
Shinola is unleashing another round of ads, this time focusing on a new target: the Apple Watch. The ads, which will hit print on Friday — the same day as the Apple Watch is available for pre-order — take jabs at the smartwatch’s extensive capabilities, pairing pointed captions next to images of Shinola’s Runwell model. Runwell launches at Selfridges on April 10, the same time as the Apple Watch. Three variations that will be printed in publications such as The New York Times and The Wall Street Journal. The final copy reads: “A watch so smart, it can tell you the time, just by looking at it;” “A watch too smart to try and be a phone,” and “Are you frightened by technology, but tired of the inconvenience of clock towers and sundials?” Chief Marketing Officer Bridget Russo says, “It strikes the right cord without being too much,” Russo said. “I think that maybe an Apple customer might say, ‘Hey, I’ll have a Shinola watch, too.”
Alber Elbaz Taking Lanvin to Dubai
Alber Elbaz is heading to Dubai later this month — billed as the first trip to the emirate for Lanvin’s creative director. The designer is to host a fashion discussion for a group of VIP women on April 15, and present looks from his fall collection via informal modeling, including a five-look capsule collection designed especially for the Middle East region.
Lanvin is also planning a cocktail party for a wider audience, including local press, later that evening. Chalhoub Group is the French house’s partner in the region.
BucketFeet Plans Chicago Studio
BucketFeet, a footwear e-tailer that is expanding further into the brick-and-mortar space, has signed its first long-term lease for a third retail location in Bucktown, Chicago. The company, which calls its stores studios, sets up its stores as part showroom and part retail space. It works with the the designs of a new artist each month for its footwear collections for men, women and children. That artist’s original works are also highlighted as part of the décor on one of the studio’s walls, a move that fosters both information and an emotional connection between consumer and artist.
The Bucktown store is expected to open within the next two months. It is also the second store opened this year. The company’s Nolita store in Manhattan opened last month. There are a total of three stores in existence. The first studio was opened in August 2013, also in Chicago on State Street. The company plans to open at least three more studios this year, including international locations in Asia.
–Selicia A. Walker
Source & Photo: WWD