Spoiler Alert! If you have not yet watched this week’s episode of Project Runway stop reading now! Not Edmond! I had my money on him and wanted him to win almost as badly as he did! I missed the episode when it first aired because I was in Chicago for our 10 year anniversary party (with Project Runway alum Kate Pankoke too) so as soon as I arrived home from the airport the first thing I did was watch it on my DVR. I’m still in shock. The last challenge before the Fashion Week runway! This is it. The four remaining designers are seated around the runway which is now a red carpet. Heidi comes out wearing a red dress on the red carpet were Tim Gunn joins her to tell the designers this week they are off to L.A. where they will not only use the city as inspiration for making a red carpet look, but where they will be constructing it. The designers are all excited. Ashely mostly because she is going home and Kelly because it seems she hardly leaves the deli where she works (is it just me, or is she growing on you, too?). They arrive at Best Western (this week’s product placement which explains all the horrible ads throughout the commercial breaks), in Los Angeles which is where they will be staying. There they meet Tim and Best Western’s Managing Director of Marketing and Advertising, Tammy Lucas, by the pool. The winner of this challenge will receive 100 free nights at any Best Western in the world. Then the designers are taken to a stunning house in the Hollywood Hills where “The Insider” correspondent Keltie Knight joins them by the pool. She explains that memorable red carpet looks need to have three elements; drama, color, and fit. This is not the time to play it safe! The designers have 30 minutes to sketch by the pool (and an amazing view) and a budget of $400 to spend at Mood L.A. (which has it’s own dog too. Not sure if the dog’s name is Swatch though). At Mood all the designers head straight for the sequins! Ashley finds this amazing matte golden beige sequin fabric that once brushed against the grain turns silver and chiffon just in case she changes her mind or looses her confidence (which happens weekly). Edmond finds this crazy Rainbow bright sequin fabric that screams Studio 54. Yikes. Candice manages to find a black sequin mesh which she is planning to combine with black fabric. Of course she is going the Elvira route. Kelly grabs a bunch of different fabrics and announces she is going to make her own textile which I think is daring and admirable. Back in the workroom at their new design digs at the Fashion Institute of Design and Merchandising, everyone gets working. Edmond whips out a quick dress from some purple fabric he grabbed for backup because he has no idea what to do with the crazy rainbow sequined fabric he bought. Once in the light of day/the workroom, it’s just not speaking to him. He literally freezes at the sight of it. The following morning Tim comes in for his critique and warns Ashely she is over-designing by trying to add a chiffon fabric to the sequins. He helps her see she needs to commit. Dare to go there. Tim then challenges Kelly about the floor length skirt of her dress. Is it really her? She really wants to do a jumpsuit, but fears it might be wrong for the challenge, but Tim reminds her that these days anything goes as long as it’s memorable and if she focuses on a music awards red carpet she could be on the right path. She seems relieved. When Tim gets to Edmond he tells him his backup dress is expected and nothing the judges ave not seem a million times before. It’s time to focus on his sequined technicolor fabric. Candice seems to be doing just fine making a boring black red carpet dress. Meh. After two days in L.A. the designers head back to NYC where they have just a half hour for a fitting before the models have to go to hair and makeup and ten the runway. So of the fit is wrong, they are screwed. Kelly fears her jumpsuit won’t fit and if it doesn’t she is up a creek, but of course she frets over nothing it fits like a glove. Ashley has to add a strap to keep her poorly constructed dress up…no boobs on the runway. Edmond’s dress, which he threw together and keeps cutting shorter and shorter is proving problematic. 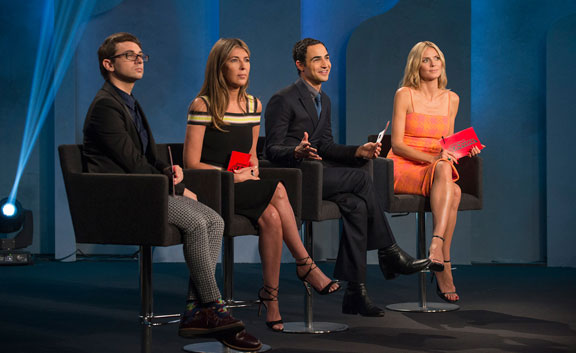 Off to the runway! This week’s judges are Zac Posen, Nina Garcia, Heidi Klum and guest judge PR superstar Christian Siriano. Tim is also there with his Tim Gunn Save. So here we go: Kelly: Her fitted grey prism jumpsuit with the leather triangle pattern she created and cut-outs is killer. It fits like a glove and has a bit of an opalescent sheen at the chest. She says her inspiration was Katy Perry at the VMAs and the judges all wax poetic about how exciting it has been watching her evolve as a designer this season. She gets her THIRD win in a row! Kelly and her fanny pack are elated. Candice: Her floor-length black skintight dress with black sequin mesh detailing and a super long train is in my opinion nothing special, but the judges seem to love it. It’s made well, but boring. Ashley: Her one-sleeved sequined bronze/silver dress look stunning on her model, but the strap looks like the last-minute add on it is. Nina loves it so she’s good to go. Edmond: His super-short rainbow sequin dress with long winged sleeves with down to there cleavage and no back is TRASHY and so NOT Edmond. The judges appreciate he took a risk but feel the dress may have taken him a hour to make and he lost his way. They agree the person wearing the dress will get noticed, bit for the wrong reasons. Poor Edmond made his worst look too late in the season. Argh! The designers are asked who they feel deserves to go to New York Fashion Week with them and why. Kelly and Candice think Ashley should go whereas, Edmond and Ashley think Candice should hit the road. However the judges claim they need to be fair (since when?) and feel that even though Edmond has been consistently great, so have some other designers, and he bombed this challenge. He gets cut and I’m in shock. Yet I notice there is not exit interview so I’m thinking Tim Gunn is going to use his save next week. Edmond does NOT deserve to go home yet and if he does I will be PISSED. Guess we will have to wait a week to see if I’m right. MEMORABLE QUOTES “I don’t travel much… I work in my deli and go home and sew. I’m excited to go!… (I made it sound like I own the deli… I don’t own deli… I make f-ing sandwiches!)” – Kelly “I’m going to dive in the pool.” – Tim Gunn “My Honda cost like $500 and I had it for 6 years. I don’t know what kind of dress I’m going to make for $400!” – Kelly “This is not a challenge to play it safe!” – Tim “It’s not talking to me. I need you to start talking’!” – Edmond “I’ve got to channel Merline? ‘Oh baby boy you got this…What do you need? You need muslin!'” – Edmond “Who says it has to be a gown?” – Edmond “Candice, I’m calling her out right here – it’s just black.” – Ashley “All I’m thinking is if these pants are going to fit or not.” – Kelly “16 and now we’re 4.” – Edmond “And look at you all, too! Matte black and spangly gold!” – Tim Gunn “I’m like ‘take your points off right now!'” – Kelly “I don’t want to be the one to bust this thing!” – Candice “From the back I saw Nancy Kerrigan doing an Elvira number!” – Zac “It’s all about the fabric and very little about you.” – Zac “It’s not gold is old!! It’s smoking hot.” – Heidi “Her cleavage is insane in there.” – Heidi “It breaks my heart.” -Nina “I kind of love it the more I look at it.” – Christian Siriano “It’s a little hodgepodge.” – Zac “I want to run around like a crazy person. I want to like weave around people and I want to hug Nina and Heidi and Christian.” – Kelly “The last challenge I get their close and I let it slip out of my hands.”– Edmond Be sure to check out our other favorite site dedicated to all things Project Runway…Blogging Project Runway! – Lauren Dimet Waters Photos: Lifetime TV