Haven’t I seen you before? In Chicago designer Kate Pankoke’s case, like two times before! That’s right, a group of 14 insane designers have come back for more torture and another chance to prove themselves as the top designer of top designers on Project Runway All Stars. At Grand Central Terminal in NYC they come out one by one in a very staged “oh, look who is here!” and trash talk opening. So who is back? Our favorite Chris March (Season 4) is back for redemption, even though he has been quite successful since his last stint on PR. We also have Jay Sario (Season 7), Fabio (Season 10), Gunnar (Season 10), Sonja (Season 10), Patricia (Season 11) Samantha (Season 11), Benjamin (Season 11), Helen (Season 12), Alexandria (Season 12) and Justin (Season 12). Oh and of course Kate (Seasons 11 &12). If you don’t remember them, you will once you see them…at least I did. There are also two Project Runway winners back to annoy and piss off the other designers – Dmitry (Season 10) and Michelle (Season 11). Unfortunately host Alyssa Milano is back and this time she is as big as a house! OK, she’s pregnant, but still the worst host ever. I had nothing against her until I saw her host this show. She doesn’t hold a candle to Heidi and something about the way she speaks and tries to judge fashion is like nails on a blackboard. She’s patronizing and I question her fashion knowledge and taste. Anywho, the first challenge is original; boys versus girls. Each teams of the same sex must design a cohesive collection (each designer is responsible for one piece) inspired by NYC’s Uptown woman or NYC’s Downtown woman. If you live in Manhattan you know, the uptown woman is more refined and upscale and the downtown woman is more chic, edgy and street. After a coin is tossed it is determined the guys will design the Downtown collection and the women the Uptown collection. Since the designers will be judged individually, one designer from the losing team will be sent home. Each team has a budget of $1,500 to split and one day to work. Oh and there is no immunity in All Stars. Once back in the workroom after a trip to Mood Fabio realizes his fabric did not make the trip back. Luckily he was able to scrape together some fabric from the rest of his team since it’s in their best interest he doesn’t show a naked model (although that could be very downtown). Mentor Zanna Roberts Rassi is back too (we like her) and after her first walk-through warns the designers they need to step up their game. “Try harder. This is “All Stars!” ‘ Let’s just jump to the runway. The judges once again are Alyssa, Isaac Mizrahi and Georgina Chapman of Marchesa (and Mrs. Harvey Weinstein) and guest judge Ivanka Trump. The runway show made it very clear which team was going to win and that was the dudes! Hands down. Some of the looks on the women’s team were downright wrong and ugly (Sorry Kate). So let’s just get to the top 3 and bottom 3, OK? TOP THREE 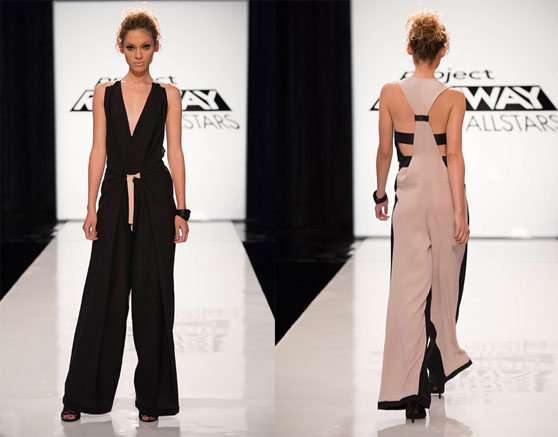 Fabio – His jumpsuit, albeit a bit too short, was beautiful. I had to laugh when Alyssa said she wanted it on her body. He would have had to make 2 more for it to fit. Ivanka calls out the hem length, but still loves it. So the guy who had no fabric pulls off the first win and Ivanka agrees to wear the jumpsuit sometime, somewhere. Congrats! Benjamin – Even though his teammates find his attitude a bit off-putting, his dress is right on the mark. Chris – I love Chris’ plaid skirt which thankfully the judges saw as an ode to a 90’s grunge plaid shirt tied around the waist. Who didn’t know someone who did that through that decade? Georgina points out the cropped corset’s fit (it’s too loose) and Ivanka calls it a “Downtown cliche.” BOTTOM THREE Michelle – I am surprised she’s on the bottom since her shift dress was right on point, but the quality of the suede is called out. Well then give them more money! Alyssa says the suede looks cheap and reminds her of car seat upholstery. Michelle is visibly insulted, but safe. Kate – Oh Kate. Everyone but you could see the flaws in this dress. She explains her girl is going to a rooftop garden party when in actuality she looked more like she was going to pop out of a clamshell at a tacky wedding in Jersey. The clamshell cups, the tightness, the color (white) and the too high slit up the back are her undoing. Ivanka says everything about it shows bad taste. That Kate truly thinks this dress is AMAZ-ing is troubling. Phew, she’s safe. Patrica – ON the other hand Patricia is not. The color of her fabric looks dirty to Isaac and the darts at the bust give the model “torpedo tits” which is never a good thing. The dress also had no style, so unfortunately, she’s out. MEMORABLE QUOTES: “So Alexandria’s back. That’s like putting a cat and a dog in like a small with no windows or doors” – Helen “She’s crazy! Oh sh*t, don’t use that!” – Helen “It’s not about winning. It’s about winning AGAIN!” – Dmitry “Being on ‘Project Runway’ is like getting a tattoo. You forget what the torture is like, and you come back on again!” – Michelle “She’s a party girl, but not a downtown coke sniffing party girl. She’s an uptown, champagne (drinking) finger up party girl.”  – Michelle “Downtown doesn’t have to mean grunge, it doesn’t have to mean punk. There’s a whole world downtown.” – Benjamin “I want this on my body!” – a very pregnant Alyssa Milano “Somebody has to start the going home.” – Patricia Be sure to check out our other favorite site dedicated to all things Project Runway…Blogging Project Runway! – Lauren Dimet Waters Project Runway Photos: Lifetime